It was a challenge for the girls to juggle practice, games, and schoolwork throughout the season, but they still managed to stay motivated and make it happen with COVID-19 precautions.

“ I think that the motivation of players was equal to what it has been in the past. The players were excited about practice because for many of them it was their only outing. It was a challenge to keep them focused on their schoolwork since most of them attended school virtually. “ Coach Levels explained.

Coaches have had to make rearrangements during practices and games to practice social distancing with the players due to COVID 19.  Players had to have temperature checks, clean basketballs, and put on hand sanitizer constantly.

“ We have hand sanitizer on the sideline and we use it several times a practice. We also have to properly clean the balls throughout practice and at the end of practice as well. If anyone feels sick, they are encouraged to stay home and if it is something that lingers, they are encouraged to take a COVID test before returning. “ Coach Levels said.

The virus has made a huge impact on everyone in the world. People have lost friends and family, jobs, stability, etc. It has taken things some of us took for granted in the first place. Human interaction is also something that the virus has taken away. Hugs and handshakes aren’t the same anymore.

“I think the virus has affected each of the players differently. For me personally, it has made me more appreciative of my family, job and many things that I previously took for granted. I’m more grateful and more intentional in my actions and interactions with people.” Coach Levels said.

In the end the girls have grown as a team and learned to appreciate this season as it was left unfinished compared to other previous seasons. They’ve had to deal with  game cancellations, new practices,  game protocols, and  unexpected quarantine periods. This was a new experience for the players and the coaches, but they all learned with Viking Pride.

“I’ve learned a lot this season and hope to use the experience to help me grow as a better coach in the future. “ Coach Level said. 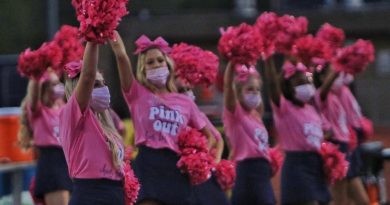