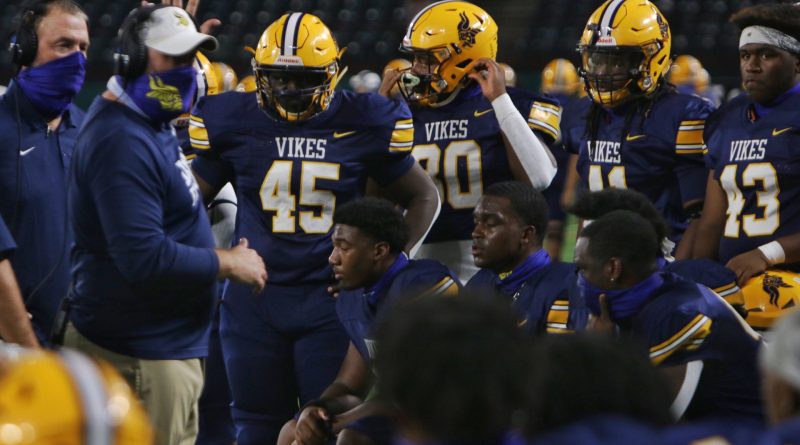 The Lamar Vikings had three seconds left to make a perfect play to bring them to overtime with a tie against the Trinity Trojans. Once the timer started, Cade Carlson swiftly threw the ball to the endzone. Cam Brady reached out but missed it by inches and the three seconds were done. The Vikes ended their first game of the season, losing 28-35.

Taking the first touchdown of the game and staying in the lead throughout the first half, the Vikes were off to a great start on Thursday’s game. But after halftime, Trinity took over with two touchdowns in the third quarter, making the score 21-28, and keeping the lead for the remainder of the game.

“It’s about minimizing mistakes and we had a couple more mistakes than they did,” head football coach Laban DeLay said. “There’s some things to clean up and we’re doing that in practice this week.”

There were absolutely no scrimmages to prepare for the season, making Trinity their first real competition of the year.

Because of this, both the Vikings and Trojans played with similar advantages and disadvantages.

“I wasn’t disappointed with their effort,” DeLay said. “It was our first time to do it. We’re correcting those mistakes right now, getting ready for Waxahachie.

Coach DeLay tries to keep his players focused on the current play.

Each play requires several roles to be functional.

Lamar’s next game is this Friday, October 2nd away at Waxahachie. After studying Waxahachie’s last game, DeLay and his Vikings found that their competitor is going to bring a tough challenge.

“They’re a good football team,” DeLay said. “They’re one and O right now and we’re O and one so they’ve got a leg up on us. So it’s a formal opponent and we’re preparing accordingly.”

The small town school is expected to have a large turnout. Buy your tickets here to help support the Vikings in the stands.