A surprise reprieve from the Texas heat found students heading home at 11:15 am on Monday due to a broken pipe in the boiler room area. For teachers and staff, the warm conditions only added to progress report submissions and catching up on grading and paperwork.

“It got to the point we had to keep doors open to get some air,” art teacher Betty Davis said. “Before we dismissed, we took classes outside in the small courtyard because it was cooler.”

The problem began on Sunday, with warm building temps greeting students and staff Monday morning. In an email to staff, Principal Andy Hagman confirmed the pipe, which provides cool air for the AC units, developed a substantial leak.

“To weld the pipe, the system had to be drained, then once the repair is completed, the system has to be refilled with water,” Hagman said. “We would not have AC for about 60% of the campus until mid-afternoon under the best of circumstances. Thus, we dismissed at 11:15.”

The PA announcement at the end of VFND period caught students and teachers by surprise.

“I thought it was a bomb threat at first,” senior Sha’Micah Sammuels said. “I saw helicopters and police cars outside. It was a little confusing. Some people thought the early dismissal was a prank.”

Local news stations reported the dismissal while suggesting that classes might be canceled on Tuesday.

“I didn’t really care just as long as we don’t have to make the day up,” freshman Iyana Grishmore said.

Because this was a maintenance issue that only affected one AISD campus, students and staff will not make up the missed time. 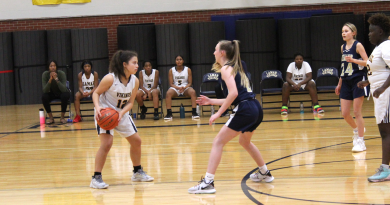 Stepping Into The Season