On Sept. 9, Lamar’s windows were shattered by a Bebe gun around 10 p.m. This incident caused damage to 13 windows that are in need of replacement.

This situation was unnecessary. There is no reason why someone should shoot the windows of a high school. 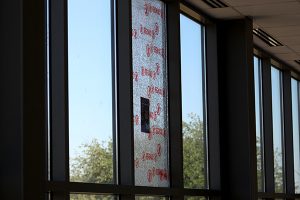 The cost of repairing the windows is going to be very expensive. It’s so stupid because the school has to pay for something they’re not accountable for.

Many students have mixed feelings about the window situation. Some students feel okay and not endangered while others feel awful.

What makes this incident upsetting is that it makes the school seem unsafe. A school isn’t supposed to be vandalized, it’s supposed to be a safe environment for students to learn.

Another reason why it’s appalling is because it’s a bad representation of the school. For example, what if someone important from the district decides to do an evaluation of the school? If they see broken windows, it doesn’t leave a positive impression of Lamar. The bright red letters taped onto the windows for safety can be seen from the street. Anyone driving by can see the front of the school has been vandalized and that is also not a good impression seen by the community.

We feel upset about the windows, but we are glad no one got injured. We hope whoever did this or even associated with this vandalism will be held accountable for their actions.

Meanwhile, the school is trying to figure out who is responsible for the damage. Perhaps the Viking community can rally  to start a fundraiser or even a donation page to help the school raise money to fix all the shattered windows.

‘Prey for the Devil’ made me pray for a fright Call Out Culture and Its Consequences