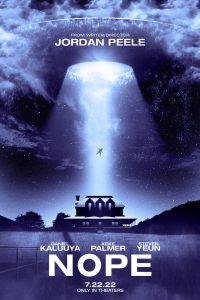 For me, my favorite point in this story would have to be the gordy attack moment. I just felt like it added more insight into what the film was about as a whole.

[Spoiler Alert] So, basically the scene goes like this: The crew is filming an episode of a popular ’90s sitcom when Gordy, who is the monkey on the show, grows more angry with each person who tries to give him a gift for his birthday until finally he loses it. He attacks the cast and crew of the show although viewers don’t really see this part; it can be inferred by the sound of screams. Viewers can see Gordy attack the sister and dad of the show violently while the young boy of the show, Ricky, hides underneath the table watching the whole thing go down. After Gordy finishes attacking the dad and sister he looks around and sees Ricky underneath the table so he slowly walks towards him  and  reaches his hand out signaling  a fistbump to ricky. Scaredly, Ricky slowly puts his hand out to fist bump Ricky but before they can touch the police come in and shoot Gordy to death.

The acting of the young boy who plays Ricky  in that scene is  impeccable. You can see the fear in his eyes and body language which pills the audience in even further. I was also impressed with the special effects they used to make Gordy and the outerworld alien  seem life-like. Watching them definitely had me on the edge of my seat. Not only that, but I really enjoyed the dynamic between OJ and Emerald Haywood. OJ was more laid back whereas Emerald was more outgoing, but they still cared for each other and helped each other out when they realized they were in danger.  Overall, I think the main point of the film was highly emphasized. We, as humans, tend to exploit and take advantage of people/animals/and things unnecessarily, and this can lead to major consequences.

I absolutely enjoyed the film, I felt like it was pretty different from your average alien movie, it explored exploitation and other real life scenarios in a metaphoric setting.

[Spoiler Alert] I like the part towards the end when OJ and Emerald, along with Angel and Micheal (played by Antlers Holst), try to capture the outerworld alien on tape in hopes of selling it for millions of dollars. However, things don’t go as planned when a stranger on a motorcycle pulls up to try and get a picture of the alien first although soon enough as he drives toward the alien location, and against all warnings, he  catches the attention of the creature causing the alien to eat him and things pretty much go left from there.

IMDB critics thought this scene was bad and the whole plot for the movie was disappointing compared to Peel’s previous work like “Get Out” and “Us.” I however thought the scene was funny and added that comedy touch to a movie that everyone loves

You can expect to see  a lot of metaphors throughout the film that contribute to the storyline. If you’re an alien movie lover then you will greatly appreciate the way Peele blends that concept in with the direction of the film. I believe this film matches the action genre more so than the horror genre because it’s a lot of moments that build up to each other and make it really intense.

The only weakness I would point out would be how simple the ending was. I felt like it fell flat from what I was expecting, specifically the alien death scene. Nevertheless the movie still did well in the box office making a worldwide total of $171.4 million in the United States and Canada.

Trick-or-treating does not have an age limit